Origins of the Punk Movement and Subculture.

It is, still to this day, heavily debated as to where and when the Punk movement exactly began. Everyone has their own thoughts and definitions and there are foundation stones found in several places which makes pinpointing the exact origin difficult. It is thought that the Punk movement emerged in the United States in the early 1970’s as an outgrowth of the 1960’s counter cultural, Summer of Love movements. Punks were often working class, scruffy, dirty in clothing and language. Here in England, the Punk movement had political and economic roots. The economy in the United Kingdom was in poor shape, and unemployment rates were at an all-time high. England’s youth were angry, rebellious and out of work. They had strong opinions and a lot of free time.

This is where the beginnings of punk fashion as we know it emerged, and it was all based around the shop; ‘SEX’ founded by Malcolm McClaren and Vivienne Westwood on King’s Road, Chelsea. There they sold all types of revival items but, more importantly, the boutique spurred the fashion scene. It emerged as the ‘anti-fashion’ boutique.

Malcolm was also the brainchild behind The Sex Pistols. Unashamedly crude, extremely emotional, and calculated to exhilarate and offend, the Sex Pistols’ music was in direct opposition to the star trappings and complacency that, by the mid-Seventies, had rendered much of rock and roll stagnant. Over the course of their short, roller-coaster existence, the group released a single studio album that changed the course of popular music. While the Sex Pistols were not the first punk rockers (that distinction probably goes to the Stooges), they were the most widely identified with the Punk movement.

Punk music was angry and a celebration of chaos, attempting to break down the barriers between the audience and performers; songs of dole queues, anti royalists sentiments, alienation and exile were often the subject matter. The clothing and hair styles were in direct relation to the swearing, spitting, vomiting, amphetamines, and crude and chaotic music. British punks wore the sense of failure, hopelessness, and disappointment that many young people felt on their bodies for all to see. 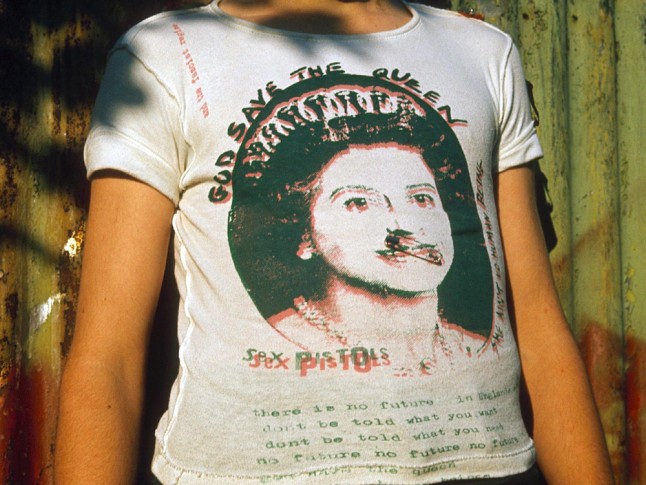 McLaren and Westwood’s ‘God Save The Queen T-shirt’. Two punk staples; distressed and a safety pin.

Westwood and McLaren led the way with zips, pins, studs. badges and tartan, all being used in some way as political statements and rebellion.

With the arrival of the 80’s civil unrest intensified and punk fashion became even more politicised. Slashed t shirts, mohawks, Dr Martens, scrawled slogans, tattoos and studs, is what we all now remember; ‘Street Punk’

We have a wide range of clothing, footwear and apparel inspired by the punk movement available from Banned Apparel retailers worldwide. If you need help finding your nearest stockist please feel free to contact us; info@bannedapparel.co.uk