History of the Petticoat

History of the Petticoat

The petticoat, petycote (probably derived from the Old French petite cote, “little coat”) appeared in literature in the 15th century in reference to a kind of padded waistcoat, or undercoat, worn for warmth over the shirt by men. The petticoat developed as a piece of women’s apparel, a skirt worn under an over gown, at the end of the Middle Ages. By the beginning of the 16th century, the over gown had an inverted V opening, and the petticoat, now visible, was brocaded or embroidered.

In the 17th century the outer skirt was looped up prominently, showing the petticoat underneath, and in the 18th century the petticoat figured prominently with the inverted V opening of the popular polonaise. In the early 19th century, women wore many petticoats, bound together, to show the great fullness of the skirt. The most popular type of stiffened petticoat was made out of horsehair and linen which earned it the name crinoline (‘crin’ is the French for horsehair and ‘lin’ the linen thread it was woven with). Worn by high class women of leisure as well as factory workers and maidservants, the crinoline wasn’t always the most practical of undergarments, with a tendency to get caught in machinery, wheel-spokes and wind; or to rather explosively take flame! Thousands of autopsies during the mid 19th century were signed… ‘death by crinoline’.

In 1856 horsehair and whalebone were replaced by a light frame of metal spring hoops; these were used to create volume underneath the hop skirts favoured by fashionable women. At their height, crinolines would expand the skirts of the wearer by up to 6 yards (18 feet!) at the widest point, though they began to diminish in size until in the 1870’s they were replaced by the smaller crinolette and then later, the bustle. 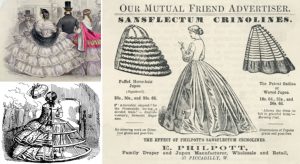 History of the petticoat

During WW1 the crinoline was revived in the form of full mid-calf length skirts with layered petticoats. It was considered patriotic to dress your best for men returning from war.  The fashion continued through the 1920’s and, in the 1930’s, just before WW2, the hooped skirt returned. Queen Elizabeth really brought the fashion back. The bell shaped, mid calf crinoline was her nighttime and daytime look.

In the late 1920’s, chiffon dresses with several sheer petticoats became fashionable. With the Great Depression in the 1930s, narrow skirts returned and petticoats again were unpopular until the end of the decade when revived for some evening, prom, and wedding gowns. World War II, with its rationing and general shortage of materials, brought an end to petticoats.

Petticoats were revived by Christian Dior in his full-skirted New Look of 1947 and tiered, ruffled petticoats remained extremely popular during the 1950’s, especially with teenage girls.

Here, at Banned Apparel, we are huge fans of petticoats ( in case you couldn’t have guessed ) and we have a huge range of the loveliest, fluffiest styles in varying lengths and colours. Our petticoats are suitable for a wide range of subcultures including Rockabilly, Psychobilly, Lolita, Gothic, Victorian, Vintage and Steampunk. 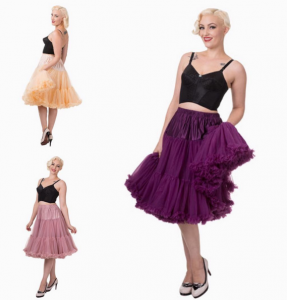 Our full and fluffy petticoats come in a rainbow of colours. 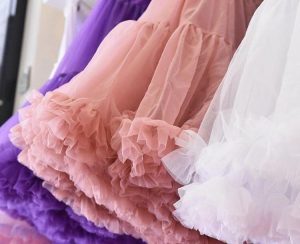 Contact your local Banned Apparel retailer for availability of our petticoats and other pieces from our full collection.

For all other enquiries please contact us at; info@bannedapparel.co.uk

2 thoughts on “History of the Petticoat”